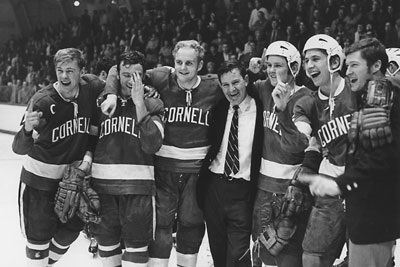 Where Angels Fear To Tread : A Cornell Hockey Blog

Cornell hockey is an institution like few others in sports. It is a program that is dedicated as much to the celebration of its past as it is to continuation of the greatness born during previous eras. It may have neither the national championships of Michigan nor the pro-scale arena of North Dakota, but stands apart from many of its celebrated peers in the unbroken connection that exists between those players who don the carnelian and white at Lynah Rink, all those who did the same before them, and generations of fans who have supported the history and culture of hockey at Cornell University. This unbroken connection and continued zeal is why Cornell is recognized as having the most zealous fanbase in all of college hockey. Ned Harkness, former Cornell hockey coach and the winningest coach in college hockey in terms of winning percentage, upon arriving at Cornell from RPI, a fellow member program of the ECAC, quipped memorably that he wanted the intimidation and the home ice advantage at Lynah Rink to be so severe that Lynah would become "a place where angels fear to tread." It is from this quote (and a few heated rivalries) that the Lynah Faithful sprang. This blog hopes to add to the great culture that the Lynah Faithful have created and add yet another forum to the sizable electronic presence that exists already for the most storied program in the ECAC.