The first thing that visitors or newly initiated members of the Lynah Faitfhul notice upon entering the hallowed confines of Lynah Rink is the aura. An immediate sense of history and tradition overwhelms even those unfamiliar with their heady surroundings. Glances progress from surveying those clad in carnelian and white to the rafters crowded with banners. The banners celebrate the historic and enduring legacy of hockey greatness at Cornell University. Inquiring spectators, both familiar and unfamiliar with Lynah Rink, find themselves asking the tales behind each carnelian-and-white banner. The banners beg for the stories of 61 championships including national championships, tournament championships, regular-season titles, and Ivy-League titles to be told. History and representation of success are omnipresent at historic Lynah Rink for the spectators. They are not the only audience on which the momentum of past successes is felt.

Opponents who brave Lynah Rink find their eyes meandering to the rafters before an opening face-off or during stoppages in play. They realize instantly that they face not skill alone, but the collected weight of generations of excellence when confronting the Big Red. History rarely can be denied. This is particularly keen at Lynah Rink. While opponents may feel the burden of history, Cornell teams feel it impelling them to success. Players for the Big Red feel this impulse before they take the ice at Lynah Rink in every game. Trophies of past success engraved with the years of past triumphs surround them as they prepare in their locker rooms. The last thing that they see before they take the ice canopied in banners is the iconic "Trust & Live" sign. The phrase reminds the players that there are things much greater than the game in life. One in hockey, as in life, must trust that a disciplined process will yield its just deserts. It persuades the players to trust not only in what they have learned, but the success that their predecessors forged largely in the same sweaters and in the same building.

History is unavoidable for all those involved with a game at Lynah Rink. This section is dedicated to the visitors and their fans who want to know what their team is up against, Cornell fans who want to revisit exhilarating past accolades, newly initiated Lynah Faithful who want to learn the legacy of Cornell hockey, current players who want to learn more about the history of a great program so that they can contribute to that history in their own right, aspiring players and recruits who want to discover the traditions of their future program, former players who need to be reassured that their contributions are not forgotten, and alumni who want to relive moments from their time on the Hill supporting their classmates in Lynah Rink, the Boston Garden, Jack Shea Arena, the Onondaga War Memorial, Herb Brooks Arena, the Times Union Center, and countless other venues. This section recounts the stories of the tournament championships in Cornell hockey history.
Click the respective banner below to be directed to a page of banners for Cornell's tournament championships in men's and women's hockey 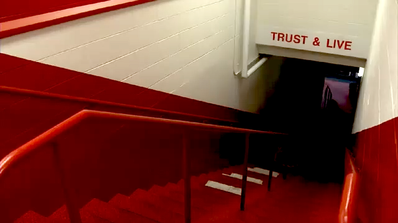